The recent Board meeting focused on two key issues: the next Code review and the monitoring of performance of the National Code of Practice.

The next Code review is planned for 2018.  We will be adopting a similar approach to last time, backed up with a series of seminars around the country, using remote streaming technologies wherever possible to improve participation.  More details will released after the August board meeting.

The Board is required to report to the industry and the Minister on key performance measures under the Code. This requires the collection of data from industry that can be analysed form a nationwide perspective.  A questionnaire will be distributed soon via Survey Monkey.  Keep a look out for it over the next few weeks. Regards,

A pleasing end to the last financial year saw a $3,500 surplus being reported.  This improved outcome from the original budget for the year was the result of less than expected expenditure of the Code Education Seminar Series during the financial year and a general focus by the Finance Committee on keeping expenditure under control.  The 2016-17 accounts are currently being prepared for audit, and the final audited accounts will be presented to the November AGM.

Membership invoices for the current 2017-18 financial year have been sent out recently, so it is anticipated these funds will flow into the organisation over the next couple of months.  Prompt payment of membership subs will assist with cash-flow and ensure the organisation can continue to deliver on its comprehensive work programme for the year.

The current year’s budget has an anticipated $700 deficit, with the ability to improve on this largely dependent on all the membership payments coming in, and hopefully some organisations who are not yet members seeing the benefit of contributing to the work that NZUAG does for the benefit of the whole industry and the wider community.

As mentioned above, the next Code review is planned for next year.  NZUAG must carry out regular reviews of the Code, with work required to commence no later than 3 years after the date the previous review was Code was concluded.  The previous Code review was completed in September 2015.

The review process will be similar to the last one: a call for general comments on the Code, particularly any issues that need to addressed; the issuing of draft amended Code based on these comments; a formal submission process followed by the adoption of a final reviewed Code for Ministerial sign off. We plan to link this process with a series of seminars around the country, using technology wherever possible to improve participation. More details will released after the August board meeting.

The Board Working Groups reported on their activities at the May 25 Board meeting.  The Code Compliance and

Code and to report to the industry and the Minister on key performance measures.  This is a requirement under Section 8 of the National Code of Practice.  This requires the collection of data such as the number of CARS submitted to Corridor Managers and the number of third party strikes on a Utility Operators assets.  The Board has been working on simplified questions so that the data collected is meaningful and can be analysed form a nationwide perspective. The questionnaire will soon be released via Survey Monkey, and we are encouraging people to take part. This information will help influence the Code review and should be of benefit to the industry. Keep a look out for it over the next few weeks.

The Code Education Working Group has begun planning a 2018 Code education seminar series, which  will tie in closely with the Code Review exercise.  Current thinking is that smaller number of seminars would be held, but with the introduction of remote streaming technologies, to allow more people to be involved  by minimising the need for travel to participate.   Further details on this will be available following the August Board meeting.

The work of the Website Review Working Group to ensure the NZUAG website remains up-to-date and meeting the need of members continues as an ongoing task.  This remains an important aspect of NZUAG’s operations, as the website is the main portal and source of information of the Code and NZUAG activities.

As already noted, work is progressing on finalising a revised KPI’s data collection tool for use this year.  Problems with the consistency of data reporting last year resulted in a major review of the data collection approach, with this year’s revised tool seeking to drill down further into the data, along with providing greater clarity around the data being sought.  The move to a Survey Monkey collection platform will hopefully make it easier for organisations to respond and improve the overall efficiency of data analysis and reporting.

A reminder that data collection is based on figures for the period 1 July 2016 – 30 June 2017, with a link to the survey expected to be available for distribution in early July

The 2017 RIMS Forum was very successful.  The NZUAG Day 2 stream saw plenty of discussion and interaction amongst attendees, with an overwhelming majority stating that they felt it offered value for money and an important event to include in their annual calendars.

Planning for next year’s Forum has already commenced, with Day 2 expanding to offer three parallel streams, rather than the two available over the last couple of years.  The NZUAG Board reaffirmed the importance of the Forum in the NZUAG calendar, and we will  promoting the 2018 event and encouraging  all NZUAG members to attend.

The 2018 Forum will be held at the Palmerston North Convention Centre in early March.  The RIMS website www.rims.org.nz, will include updates as the year progresses, or details and offers of participation can be directed to Brett North (email brett.north@wcc.govt.nz), the NZUAG rep on the Forum planning committee.

Diane Green from Vector made a presentation on projected EV uptake in NZ, which was followed by a discussion on how charging infrastructure should be viewed from the perspective of the National Code of Practice.  Key points from the presentation and discussion were that a rapid growth in the number of EV models on offer and the uptake of these can be expected over the next 10 years.  In the US this is expected to coincide with the growing acceptance of on-demand autonomous vehicles, with most of these expected to be EV’s.  A major factor in consumer-level uptake of EV’s will continue to be availability of publically accessible charging stations, even though it is expected that most charging will take place at owners homes, at least until battery ranges increase and costs decrease sufficiently for touring vehicles to become generally affordable. Initially a majority of chargers within the NZ market were in the <22kW capacity range, while currently the recommended power output is to provide fast charging (43kW minimum) for new installations.  Within the next 5 years EV charging capability is expected to reach 150kW, utilising DC rapid charging technology.  Such charging rates could see charge times significantly reduce although the car itself controls the charging rate.

From an NZUAG perspective the key question is how such charging technologies should be treated – i.e. do they exist as Works, in which RCA’s would have little control over where they were placed, or should they be considered as Installations, in which case there would be no automatic right of installation with RCA approval being required for each one and the National Code of Practice would not apply.  This question arises as there are some ambiguities in the existing legislation making it difficult to define an approach.  The NZTA was tasked by Government to interpret the current statutory position and after consulting with experts across the industry have expressed the opinion the only sustainable legal interpretation is that they should be treated as Installations, although dis 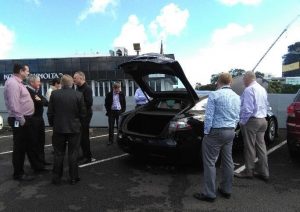 senting views are still possible.  Further debate and discussion within the industry is still likely but it will likely require a court decision before a final decisive outcome will be able to be reached.

At the conclusions of the discussions, the Board were given an opportunity to look over a latest model Tesla S, which Diane had brought along for the Board to view.

The Board commenced a discussion on the extent and way in which NZUAG should become involved in training within the wider industry.  This follows invitations for NZUAG to provide input into the development of training standards for asset locators, and to participate in a newly established Australasian Utilities Forum, which would be focused on industry training and health and safety issues.   It was agreed that it is too early yet to make a final call on the extent of NZUAG involvement in these areas, with further discussion to take place at the August Board meeting.